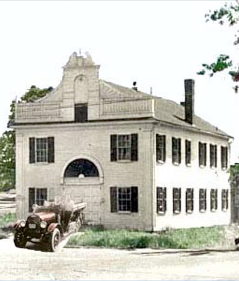 The walls of the downstairs room at Atlantic Hall are lined with old photos depicting the Hall’s colorful history. Local residents for the last nearly 100 years have used the Hall for so many purposes, including weddings, memorials, holiday parties, town meetings, concerts, plays, film-making headquarters, and music video production. And while it’s a focal point for all those who live and visit Cape Porpoise, getting it built wasn’t easy.

According the the History of Cape Porpoise, by Melville C. Freemen, it was in April 1906 that the Cape put together its first fire fighting organization, calling it the Atlantic Hose Company, and the different members kept different parts of fire fighting equipment in each of their barns. With the advent of the automobile, the ladies of the community raised funds locally and were able to buy a Chevrolet hose truck — and now they just needed a place to put it. Cape Porpoise needed a fire hall, and what better place than the very center of the village. 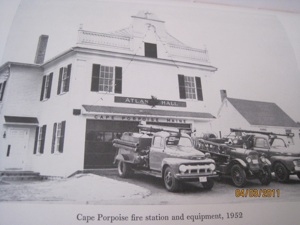 True to its character, the Atlantic Hose Company did not appeal to the town for the funds, but instead raised the monies and built it as they could. The foundation was poured in 1914; the floors and sills added in 1915. The advent of the World War I put the plans on hold until 1919, when local resident, Marion Goodall Marland hired the well known Boston Architectural firm of Kilham, Hopkins and Greeley to design the new building. The plans called for the engine room on the first floor, as well as a dining room, kitchen and small library. On the second floor was to be a hall that would be a meeting place for residents to gather.

Local builder, Frank R. Hutchins raised the building during the winter and spring of 1920 and for the next 30 or so years it grew with the demands of the community and served not only Cape Porpoise, but Kennebunkport, and Goose Rocks as well, especially during the Great Fire of 1947. 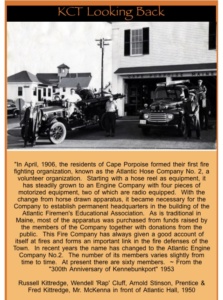 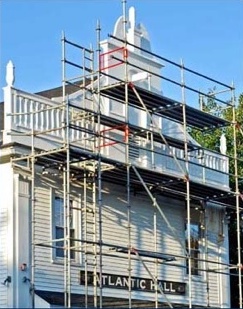 It was in 1958 that the Atlantic Hose Company outgrew its station at Atlantic Hall, and a new fire house was built across the street and is still the Cape Porpoise fire house today.

Care and management of the Hall was given to the Atlantic Fireman’s Educational Association and its Board, which celebrated its 100th Anniversary in 2012.  Atlantic Hall has since then been the site of so many events over the years and has provided memories for so many families and people. Atlantic Hall is community owned event site and is maintained through rentals and fundraising, including pancake breakfasts, book sales, craft fairs, and the sale of t-shirts and hats.  Constant updating and improvements has kept Atlantic Hall in great shape, while maintaining its historic charm.

Donations are always welcomed and can be mailed to:

Hats and tee shirts make great gifts for those who use the Hall as well as those who love Cape Porpoise. They come in a variety of colors and sizes and can be purchased by contacting the Hall at rentals@atlantichall.org.

Atlantic Hall is a wonderful, traditional, down-home Maine venue for private parties. Area caterers are familiar with the hall, and the main hall upstairs offers a great 'palette' for your creative ideas! It is simple to arrange a visit to see the Hall by going to our Rental Information page and completing our form.

The Heart of Cape Porpoise, Maine